IMPLODE - The Hour Has Come (CD) 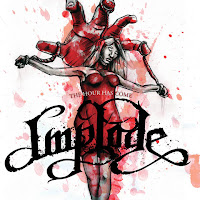 Sweden seems to be a highly fertilized breeding ground for new melodic death metal bands. There seems to be a new name popping up every week. Even though there’s a high risk of all of them melting together in one big pot if you don’t keep close track of them as they appear, a lot of them still have enough personality to shine on their own. I shall however point out that the bands that have already made a name for themselves such as Sonic Syndicate, Scar Symmetry, Soilwork and of course veterans like In Flames, Dark Tranquillity etc. have a much easier task. Fairly new label Supernova seems to be picking up several of these new acts. I have previously reviewed and written about Descend, Sarea and Hate Ammo. One of the newcomers of this label is Implode, voted best unsigned band in magazine Close-Up, before being picked up by Supernova. I agree, Implode is a highly competend, great sounding, tight, well-oiled thrashing death metal machine. The songs are really good and the performance top notch. However, I lack a bit of personality. They have all the right elements featuring angry vocals, (with some clean mixed in), great guitar solos, a really fat and thick wall of sound production, a drummer that knows how to work his feet. But, still, there are a lot of these type of bands out there with the same qualities, the same sound and songs in the same vein. There’s only a few songs that sticks out a bit for me, one being A War Within, which starts out with some cool dissonant clean riffing, moves into an almost doomy territory before the mayhem is released. I also like the kinda off-beat riffing in Black Crown and the Pantera-style riffing in album closer My Scornful Wrath is another highlight of the album. So, great sound, great band, but lacking in personality, at least for me.
Janne Stark
Label: Supernova
Year: 2011
Link: http://www.supernovarecords.com/artists.php?show=32
Posted by Janne Stark at 01:46 No comments:

ABSORBING THE PAIN - Songs Of Hate, With Love (CD) 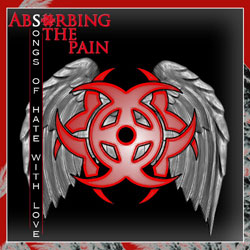 Rambo Music, a new Swedish label that is really vacuuming the Swedish market for new interesting acts. Here’s another one – Absorbing The Pain. I had actually missed the debut by these Örnsköldsvik boys, but was quite blown away by Songs Of Hate! If Spiritual Beggars and Black Label Society would have a threesome in a concrete blender that resulted in a bastard child, this might be it. Heavy detuned riffs, staccato crunch and clean strong vocals riding on top of this concrete bed. I do like Black Label Society, but sometimes the songs kinda melt together and Zakk’s vocals become a bit tedious when he does his best to sound angry all the time. I actually liked him much better in Pride & Glory. Singer Jonas reminds me a bit of former Spiritual Beggars, Kayser later Spice And The RJ band/Band Of Spice singer Christian “Spice” Sjöstrand. Yes, the songs are really heavy and the album is quite consistent, but there’s still a lot of variation. The production is quite ambient for such a heavy album. The drums sound quite acoustic as a nice contrast to the mostly overtrigged drum sounds of today’s heavy bands, while the guitars really form a brick wall of sound. I will see Absorbing The Pain on the Rock Out Wild festival, and I’m really looking forward to it!
Janne Stark
Label: Rambo Music
Country: Sweden
Year: 2011
Link: www.absorbing thepain.com
Posted by Janne Stark at 00:01 No comments: 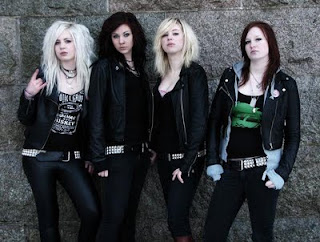 Picka Dolls (yeah, you have to be Swedish to understand that, I know) is a new Swedish all femme force from Växjö. The band has just recorded their first four track demo and I must say I’m quite impressed. The band is fronted by singer/bassist Carro who has some great pipes. The demo opens with Trashcan Concubine, which is in my opinion the crown jewel of the demo. The band does need some more time in the rehearsal studio to get all the details right and foremost to get it all to glue perfectly together. But, I tell you, the fundamentals are there! Musically they are not as metal as Hysterica or Crucified Barbara, but they actually have a touch of the 70s as well as some vintage punk-elements. An interesting musical mix which sets them apart from many other bands. This is definitely a band too keep your eyes on.