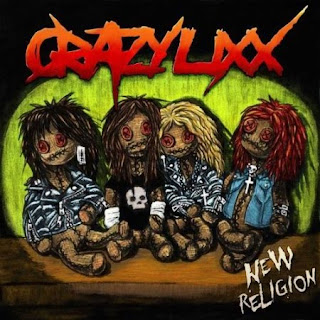 Boy, this sure feels like a nice step-up! I’d lie if I said I was a big fan of this Swedish sleaze/glam unit. However, this time they have really got a tight and great sound, songs that work and a singer that don’t promise more than he delivers, and he really does deliver! Crazy Lixx is by no means inventive or unique. Opener “Rock In A Hard Place” reminds me a bit of Bon Jovi’s “Dead Or Alive” here and there, while the subsequent “My Medicine” starts of with a riff that could be a cousin of Poison’s “Unskinny Bop”. “Blame It On Love” may as well have been a lost power ballad by Pretty Maids and the choruses on the album oozes of John “Mutt” Lange’s classic Def Leppard production. Well, it sounds like I’m complaining, but I’m actually not, as this is a really good album! It doesn’t sound like anything Swedish. My guess, without knowing, would have been a lost gem from the mid/late eighties with unusually great production (especially the pleasant lack of the horrible BIG drums). What surprises me is that this album is less glammy than I expected, that there’s more AOR in the choruses and that this is closer to classic melodic hard rock, than glam. It actually wasn’t until the cowbell entered in “Lock Up Your Daughter”, not that the track is any less good because of that. “She’s Mine” is however a bit too poppy for me, almost sounding like something Bryan Adams could have written. The album of course has the classic powerballad in “What Of Our Love”, which could have become a huge hit if the almanac read 1986, instead of 2010. A short, but sweet, slide thingy opens the road for my favourite track on the album, the stomping riffster “Voodoo Woman” which closes the album in the perfect manner. This album was a nice surprise and I suspect this may well be THE party album of 2010.
Janne Stark