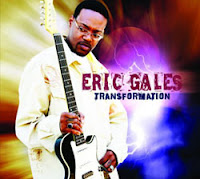 Eric Gales stunned me back in 1991 when he made his debut with the self-titled The Eric Gales Band CD. He was a young and innocent guitarist with an incredibly explosive guitar style, like a re-born Hendrix on steroids. Much have happened since, numerous albums and a long personal journey. Eric is quite fresh out of prison for drug charges, where he starts the album by claiming his innocence in the song Railroaded. He talks about being framed. If it’s true story, well, what do I know. If it’s so, it of course sucks, but what really matters is that he once again delivers 100 % guitar magic! He has, on some of the previous albums, strayed away a bit and tried using loops, some more jazzy bits, some more traditional blues, some almost poppy stuff, but Transformation is Eric in the zone. Just check out killer riffage á la carte stuff like Tortured Mind, Railroaded, the heavy funkster Altered Destiny, the slightly ZZ Top:ish I Pity The Fool and the heavy rockers Catchin’ Up With The Past and closing track I Wouldn’t Treat A Dog That Way. Even though Eric’s work on the latest 2-3 albums has been pretty consistent, I think this is his best album in years. His guitar-playing has that perfect mix of feel and edge. At times you can almost see the sparks flying. His vocals are like always pretty laid back, but it fits the songs, so I won’t complain. I also must mention his outstanding backing musicians who really help ignite the sparks: bass player Aaron Haggerty and drummer Steve Evans, to guys who really play a big part in making this rocker roll!
Janne Stark
Label: Provogue/Shrapnel
Year: 2011
Country: USA
Posted by Janne Stark at 01:27