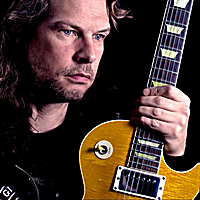 This is blues rock guitarist Sannetorp’s third album. Mats is a really good blues rocker with songs in the vein of Bo Wilson, Gary Moore (the blues era), at times with a southern touch. Sannatorp is a Les Paul guy, so no Hendrix comparisons here. The music is quite classic blues rock with dark and quite depressive lyrics, half in English, half in Swedish. If his guitar playing is quite flawless, the vocals are unfortunately not. The voice is decent, but the English pronunciation makes me cringe, I’m afraid. Even though most blues players have a hard time letting anybody else interpret their lyrics, Mats would really benefit in doing so. It’s actually way better when he sings in Swedish, even though it’s all quite straight ahead with no real bluesy feeling in the vocals. As I said, the guitar playing is way more interesting, with a nice fiery tone, like in the excellent instrumental Ain’t Gonna Cry. The Darkest Hour is a really nice heavy rocker, which is only let down by the vocals. This could be really good with only some adjustments. The band is tight and good, the guitar playing kicks ass and the songs are not bad at all.
Janne Stark
Year: 2012
Country: Sweden
Label: private
Link: http://www.sannetorp.com/
Posted by Janne Stark at 23:34