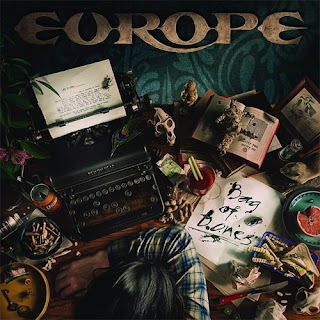 ”We have gone over the edge, we have lost our minds and we have started playing real rock ’n roll”, says Joey Tempest. I would like to suggest the contrary. Well, not that they don’t play real rock ’n roll, but that they have lost their minds. They are in my eyes wiser than ever! Of course the band will never be able to fully satisfy all their fans, old and new, but Bag Of Bones picks the best of the band’s new sound adopted on Start From The Dark, and mix it with good old classic hard rock, oozing of the seventies. The album kicks off with two mid tempo groove-oriented riff-rockers with a strong melodic feel. They are followed by the more intense Firebox, drawing a bit more towards Secret Society. The title track opens with acoustic guitar and a bit of slide from guest guitarist Joe Bonamassa, moving into a bluesy passage to the up-tempo verse and a heavy bridge. A cool and varied tune, indeed. The thirty second intro Requiem, opens for the lead heavy, but still quite cool, My Woman My Friend. Here Norum rips a solo with his inimitable feeling mixed with technique, and continues to slide in some cool solo licks in the chorus. I do love the guy’s tone, no doubt about that! Demon Head continues to bid you some heavy riff-oriented hard rock, without losing the melody. This is really good! After a break it’s Norum time again. It feels like he on this album has been compensated for the cut-short solos of the previous releases. Me like! I shall also point out that Tempest’s voice really fits the band’s bluesier vibe. Drink And A Smile is a slightly odd acoustic number, which made me think of old Swedish rocker Pugh Rogefeld’s song Grävmaskinen mixed with Joe Bonamassa. Cool on, maybe not for everyone, but still. Doghouse is straight ahead hard rock in the vein of Gotthard with a touch of Zeppelin, while Mercy You Mercy Me draws a bit from the modern riffage of the previous album. The album finishes with the cigarette lighter (now cell phone) ballad Bring It All Home, where Norum again gets to shine. All in all a really great album with a great nod to the old school, and even if Tempests sings they’re not supposed to sing the blues, they do it very well. A great album!
Janne Stark
Year: 2012
Country: Sweden
Label: Gain