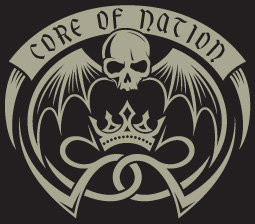 Swedish doomsters Core Of Nation have been at it for a while, but only released one CD prior to this. Septor Of Doom is a 6-track MCD in a cardboard cover. The choice of cover, Black Sabbath’s Electric Funeral, definitely shows the musical direction of the band. This release also marks the debut for new singer Andreas Hedman, formerly with Scaar. The CD opens with Black Temple, a doomy riffster in the vein of classic Candlemass. It sets the direction of the record and also shows Hedman is a singer well suited for the heavy riffing, similar to the way Johan Längquist fit into the first Candlemass album. Not in the same class, I should add, but still ok. I wish he would let loose a bit more, as he tends to sound a bit stiff in the long run. There can be feeling in doom as well. Musically it’s heavy and it’s slow, but it’s not boring. They do succeed in keeping it interesting enough to keep listening. Nice guitar harmonies spice it up a bit here and there. The cover of Electric Funeral then? Well, first of all, having the balls to take on such a classic gem is ballsy! The result? Well, I’ll give it 2.5 out of 5. It’s just a regular “let’s-play-a-Black-Sabbath-song-coz-we-like-it” version. No personal touches or re-arrangements worth mentioning. Plus the vocals are not really up to par with the original, again because of the lack of feeling. Still, I don’t mind listening to it. The closing track Two Suns is a pretty cool semi-ballad type song adding a bit of spacey experimental seventies effects, which makes it a bit more interesting. The tempo change in the end also adds some new textures to the song. Like I said, not bad at all, but I think the next one will be more interesting!
Janne Stark
Label: Doom Dwarf Records
Year: 2011
Country: Sweden
Link: http://www.coreofnation.com/
Posted by Janne Stark at 06:29