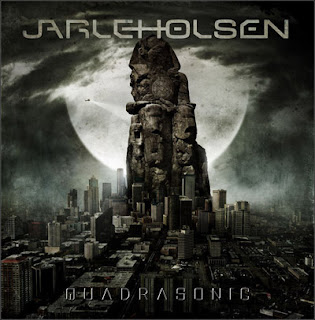 Norway hasn’t really provided that many international shredders, besides Ronnie Le Tekro and a handfull others. Now, young stringsman Jarle H Olsen is here to change that. His first solo album Quadrasonic is a really impressive affair. It’s actually been some time since I found an instrumental progressive album this interesting. With Jarle it’s not just the shredding that is in focus, it’s just as much about the songs. What I really like is that this actually feels more like a band effort, than a regular guitarist-shredding-his-ass-off album. Sure, there is tons of great soloing, but the songs are structured more like songs with vocals. You have your verses, choruses and bridges, although quite a lot of bridges here. The songs, like Dark Matter for instance, have great build ups, with nice dynamics happening. Here Jarle also shows a softer and more balanced side, without any overpowering distortion. There’s also a great explosive technical part in the end, where things happen all over the place. I also love the fact that he’s using real live, and outstanding, musicians to back him up. They do need to be mentioned, so here it goes: the outstanding technical drummer Bjarte K. Helland, Norway’s answer to Mike Portnoy, bass player Rodrigo Garcia who lays down a great foundation, plus proves he’s quite the technical player as well, and finally keyboard player Alex Argento whose playing may not be highly noticeable in some songs (you would definitely notice if it wasn’t there, though), while he really shines in songs like Event Horizon. Quadrasonic is a great album, at times in the same vein as George Bellas, before he started experimenting too much. Great songs, great playing, great production, a sure buy!
Janne Stark
Label: private press
Year: 2011
Country: Norway
Link: http://www.jarleholsen.com/
Posted by Janne Stark at 05:58