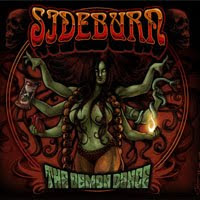 Sideburn are no nubes, but even if they were formed already 13 years ago, this is only their third album. They even put Def Leppard to shame. Well, there ends that comparison however. This Stockholm based trio picks their influences from the classic hard rock and bands like Black Sabbath, Led Zeppelin and Deep Purple. I did like Sideburn’s earlier albums, but I felt they sounded more like the average Swedish stoner band. Now I feel something has happened. Sure, there are strong vibes of colleagues like Spiritual Beggars and The Quill, but if you listen to the album’s third track “Song For Hope” influences from the more varied and solemn seventies shine through. This track feels more akin to Bigelf, but with a touch of the old symphonic bands. Here are soft, lengthy melodic parts that float like on clouds, to suddenly be interrupted by lead-coated riffs and Morgan Zoceks killer guitar solos. He balances his style between technique and blues, with a pretty big vibrato that owes a lot to Yngwie Malmsteen. The subsequent track “Fallen Sun” opens with nice guitar picking and a bass solo by Martin Karlsson, this one also with a nice symphonic touch mixed with heavy riffing. Martin also plays keyboards, which gives the album a new and well needed dimension. The band should however attract classic stoner fans, particularly in the crusher “Dyin’ Day”, where Jani Kataja sounds like a long lost cousin of The Quill’s singer Magnus Ekwall. This also sets him apart from most of the, sometimes a bit boring, traditional stoner howlers. Jani has a clear and pure voice, with a nice dose of white blues. I really like the fact that Sideburn resist the temptation to just grind, but instead take their time to soften the distortion a bit and use dynamics, like in heavy bluesy “Shining”. It has a nice semi-fat neck pick-up Les Paul on the rhythm chart. Once he lets it rip he just ups the volume and lets the natural power speak, instead of adding a lot of fuzz. This gives it a lot of dynamics, which is something I often lack today. Dynamics is also the word of honour in “Rainy Day” with its acoustic guitar and dry up-front vocals. When a cool electric guitar is added in the background and the drummer just adds some cool tom-tom playing, these guys prove they know what it’s all about. Furthermore the song keeps on building up to transform into a, slightly surprising, flamenco:ish theme which takes the song into a new direction. The relaxed “Shapes” with its almost eight minutes should give fans of Led Zeppelin value for money. I won’t say more, just – I recommend this one strongly!
Janne Stark
Year: 2010
Label: Transubstans
Country: Sweden
Link: www.myspace.com/sideburnsweden
Posted by Janne Stark at 03:35 No comments:

Holy-one-hell-of-a-fucking-shit! After too long silence Mojobone is back with a vengeance! This brainchild of Opeth/Spiritual Beggars man Per Wiberg has given the world two previous releases, who were killer, but they’ve actually managed to blow these away! This is down and dirty, groovy, riff-heavy seventies influenced hard rock at its best! The title has to be one of the most misleading I’ve heard, though. It would be better off named after the track “Celebrate Armageddon”! I won’t go through every track, but opener “Over The Hills” (not the Gary Moore cover) sets the style and pace right away. Heavy, groovy and with ultra-phat riffing. Besides handling the keyboards, guitars and bass, the multitalented Wiberg also handles the vocals. And, he does it great! “Damaged Gods” continues with some gritty drums, courtesy of Marcus Källström (Stonecake, Sky High) and some wah-wah guitars by Spiritual Beggars colleague Mike Amott. “The Peacemakers” takes off in a cool mid-pace with some clean guitars and an almost poppy verse, with the chorus proving to be one of the coolest, grooviest and most hook-laden grooves in a long time, accompanied by some hand clapping. When was the last time you heard hand clapping on a modern hard rock album? It’s followed by one of the heaviest and doomiest riffs I’ve heard in a long time, “Cowboy Mode”. Simple, but oh so effective! Really cool stripped down verse with a brutally fat and distorted bass supporting the vocals. “The Ones That Got Away” starts with some acoustic guitar, but soon kicks off in a cool up-tempo backbeat tempo. This one has some cool Zeppelin overtones and shows the talent of young blues guitarist Christopher Shoori. “Shadow King” also shows the diversity of Mojobone with its soft, almost proggy, touch. “25 Years” also shows a new side of the band, starting off in an vein close to Black Crowes meets The Soundtrack Of Our Lives (but good…). My preference for album title, “Celebrate Armageddon” is an awesome, heavy and funky track, that builds up in a really cool way. It reminds me a bit of Danish rockers Blindstone, which is a great thing in my book. “End Of Music, End Of Story” starts off with a slow, heavy lonesome, fuzzy guitar riff that sets the pace for this slow, almost doomy rocker. The verse is cool and based on drums, vocals and piano, while the chorus brings in the heavy artillery. The album ends with a cool porch blues version of “Over The Hills” which ends the album in a cool way… and now I did go through all the tracks anyway… Well, go out and get it!
Year: 2010
Labe: Hippodome
Country: Sweden
Link: www.myspace.com/mojobone
Posted by Janne Stark at 03:30 No comments: