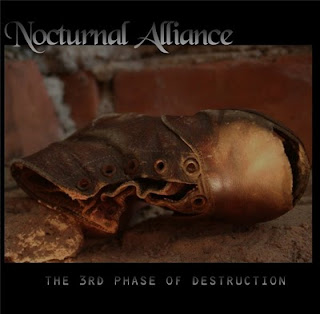 Nocturnal Alliance was formed in 2004 by former Twilight/Beyond Twilight members Micke Därth and Henrik Johansson. Before this Därth also recorded with the band Detest. Prior to this release Nocturnal Alliance has released a couple of demos, which I haven’t heard (unfortunately). This was however a nice surprise. The band has borrowed former Axia/Leviticus singer Peo Pettersson, a singer/guitarist who has released some solo stuff in a far more poppy AOR vein. Here he gets a chance to show his metal edge, which he should do more often. There are also guest appearances from Janne Ström (Slug) and Linus Abrahamsson (Mister Kite/The Codex).
“The 3rd Phase Of Destruction” is a nice power pack of progressive metal in the vein of bands like Shadow Gallery or a more light weight (technically, that is) Symphony X. It may not be filled with shredding guitar solos, but the ones that are there, they rock! The songs are very well-arrangements and keeps the listener interested all the way through. Nice changes of pace and rhythms, without being over-proggy. It’s on the other hand quite dramatic and almost Wagnerian in the approach at times, which makes me think a bit about the long lost Psychotic Waltz at times. The second last track is the wonderful prog-ballad “With” with female guest vocals by Michelle (no last name, I’m afraid), only overshadowed by the even better final track “How I’m Dead”, another very dramatic ballad that builds up to a crescendo. My only complaint would be the production which lacks a bit of ambience and power. It’s not bad, by any means, but I can only imagine what this would sound like in the hands of someone like Neil Kernon. Anyway, a great CD well worth investing in for fans of melodic and progressive high class metal.
Janne Stark
Year: 2009
Label: Private
Country: Sweden
Link: www.myspace.com/nocturnalalliancesweden
Posted by Janne Stark at 05:55 No comments: