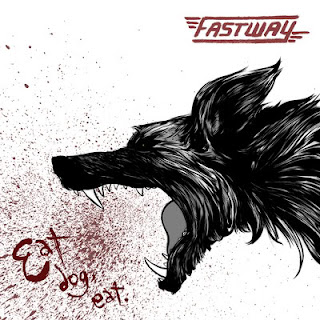 Ok, I will confess I haven’t really listened to Fastway since the first, outstanding, album was released. After that I thought they went too commercial and I lost interest. Now Fast Eddie Clarke has returned with a vengeance. Eat Dog Eat really takes us back to the classic back to basic hard rock resting on the traditional British bluesy foundation. Toby Jepson sings his ass off and I truly love his vocals. The album kicks off with Deliver Me, which almost makes me think of what would happen if Led Zeppelin and AC/DC had a baby. It’s a very consistent, but still varied ten track collection, incorporating some good old boogie based hard rockers like Leave The Light On, cool acoustic balladry in Dead And Gone and tons of classic hard rock. Great production, great songs, and all in all one album I didn’t know I had been missing until I heard it. It isn’t original, it has no bells or whistles, but it’s a damn fine album, on I will probably wear out.
Janne Stark
Label: Steamhammer
Year: 2011
Posted by Janne Stark at 13:50 No comments: 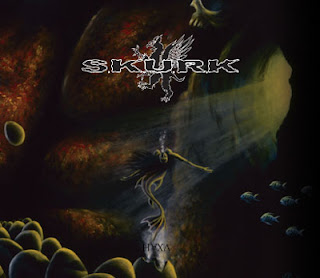 Fuckin’ hell! This is brutal! Not sure if this will fully appeal to or be appreciated by non-Swedish speaking listeners, as the vocals are sung in the most brutal Swedish “skånska” dialect. This is the second album by S.K.U.R.K, and this album sure takes the sound and style of the band a few steps further. The lyrics are really raw and brutal, dealing with bitterness, injustice and drug addicted mothers. Lindhe’s vocals are crude and raw, but fits so well with the heavy, rough edged metal this band produces. Nidvinternattens Sorg brings out some touches of vintage doomy Sabbath with Lindhe whispering the lyrics. Songs like Brinn Malmö Brinn and Ku Klux Kerub also have a doomy touch, but with a higher tempo, where the latter reminds me a bit of Children Of The Grave in its tempo. I do hear some touches of Candlemass’ Messiah when Lindhe hits the higher notes as well. The band’s view of today’s night time scene Disco Grotesque is quite melodic in its crudity. The lyrics really grab you and I can find no better way of presenting them than in this way. This is a really good album, both musically and with the fitting vocal presentation. Me like!
Janne Stark
Year: 2011
Label: Denomination
Link: www.facebook.com/skurk666
Posted by Janne Stark at 13:44 No comments:

KRUX - III He Who Sleeps Amongst The Stars (CD+LP) 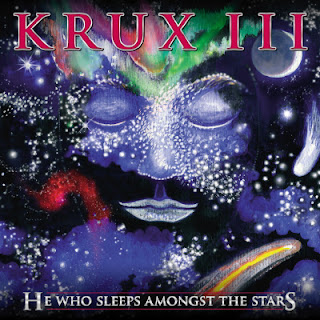 Interesting… I didn’t even notice I had listened to the same album three times in a row. It just keeps on and on without getting boring. Krux is the boiled down who-is-who of Swedish metal featuring singer Mats Levén, guitarists Fredrik Åkesson and Jörgen Sandström, bass player Leif Edling, keyboardplayer Carl Westholm and drummer Peter Stjärnvind. No use going through what each and everyone has been doing, mentioning names like Opeth, Candlemass, Entombed, Yngwie Malmsteen and Therion is enough. Such line-ups can easily become fuck-ups. Well, not in this case. Krux have delivered since their first self-titled release. On their third release they do it again, now more than ever! Three of the members also formed part of the band Abstrakt Algebra and the similarities are many. For some reason Krux however hits me way harder. It’s all about simple melodic riffing with doom written all over it, but without becoming drony and boring, despite the songs being quite long. Plus, Mats’ voice really fits this genre. This is a highly recommended CD, also available on vinyl from High Roller.
Janne Stark
Year: 2011
Label: GMR (CD), High Roller (LP)
Country: Sweden
Link: www.krux.se
Posted by Janne Stark at 13:40 No comments: 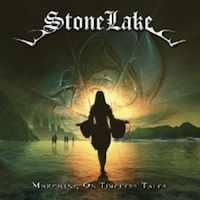 Swedish melodic metal merchants Stonelake are back with their fifth album. The band is and have always been, really good, but what I’m not convinced by is the mix. There’s a lack of balance with the drums sounding horribly digital and sterile, and also overpowering the sound, making the guitars lack. It feels like things have been recorded in different studios, mixed separately and then just pieced together without really thinking about the sound gelling together. I do have a hard time getting past the horrible drums, both the sound and performance. The guitars probably sound great on their own, but the lack power in the overall sound. Singer Peter Grundström often makes me think of Poodles vocalist Jake Samuel, which is fine by me. The songs are pretty good, and at times remind me of Lynch Mob in their better moments, mixed with Masterplan or Circle II Circle. Some really nice guitar playing from Jan Åkesson, but I think he should concentrate on the guitars and let someone else handle the mix. It’s always good to have an outside opinion (wish someone had forced Yngwie to take that advice, too...). The first half of the album is quite varied and really good, while the second half doesn’t offer as much diversity and it feels a bit too standard to be of greater interest unfortunately. Still, well worth checking out for fans of melodic metal with a touch of power metal.
Janne Stark
Label: Massacre
Country: Sweden
Year: 2011
Posted by Janne Stark at 13:04 No comments: 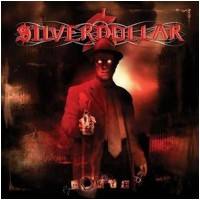 Swedish band Silverdollar I remember from the beginning of 2000, when they used to play covers. Their first CD Covers From Hell contained renditions of Ozzy Osbourne, Dio, Motörhead, Iron Maiden, WASP etc. This actually feels quite evident when listening to the band’s third album Morte. There’s a bit of Judas Priest here, a bit of Maiden there, some Helloween inbetween, topped with a bit of Zakk Wylde-harmonics and a singer that sounds like mixing Kai Hansen, Udo Diskschneider, Rob Halford and adding Bruce Dickinson’s vibrato. I’m not saying this is bad, because it asn’t. It’s just, well, lacking personality. I hear a lot of influenced but very little originality, or even their own spin. Everything sounds like something I’ve heard somewhere before. Like I said, what they do, they do do great, but I have heard it before, and I’m not sure I’ll be listening that frequently.
Janne Stark
Label: Massacre
Country: Sweden
Year: 2011
Posted by Janne Stark at 13:02 No comments: 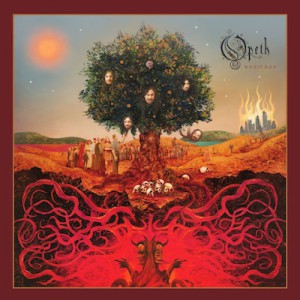 I just love the way Opeth have developed. I didn’t care for their old death metal records, but did felt they had a lot of great potential musically. Then, when things started going towards the more progressive side I started listening. Deliverance, I think was the album that made me really listen. After this they have just started growing album by album. The last one, Watershed, as as close to perfect as they had ever come in my book. Now, Heritage is here, and they have dropped the growling altogether, the music is as intricate as ever and there are so many moods and feelings floating around on this album it would make even Ingemar Bergman jealous. The album starts off with a soft piano piece that could have been written by Jan Johansson back in the seventies. Soft, tender and lovely. The piano is played by guest musician Joakim Svalberg. They move into the multi-layered The Devil’s Orchard, which touches on fusion, jazz, but still rests on a heavy, slightly dissonant, proggy/symphonic foundation which brings it forward without stopping. I Feel The Dark starts off softly with just acoustic guitar and vocals, adding piano, mellotron and later on drums and electric guitar, but still not in an overpowering way, not until halfway through when the pandemonium enters. This is definitely an album you just don’t put on and wash the dishes to. It’s quite demanding and challenging, and I really like that! This is an album that gives me something new each time I listen to it. It’s all so well thought out, each part and instrument has a meaning. Nothing is random. What I also like is that the album goes though so many different moods and styles, from the aforementioned piano piece, to fast paced prog metal in Slither (recorded in memory of Ronnie James Dio), to the soft and gentle acoustics in Häxprocess and Famine, where Björn J:son Lindh adds his flute magic against a pretty heavy backing. The Lines In My Hand shows another different, very melodic side, still highly progressive and odd rhythmic, but with nice melodic harmony vocals. This is in my opinion the band’s strongest effort so far, the most challenging, but also the most rewarding. Finally, I must give credit to the cool 3D cover, which really adds an extra dimension, plus the bonus-DVD containing the 5.1 surround mix, bonus tracks and a documentary. 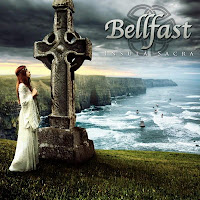 Now, here’s an interesting combination. A Japanese band playing Celtic influenced hard rock! Intriguing indeed! Another interesting detail is that the album was mixed by none other than Andy LaRoque! Looking at the band photo, these guys and girls mean business! Musically, yes, they do mean business in that department as well. This is actually really really good! Think heavy Jethro Tull meets Thin Lizzy meets Horslips, but with an aggressive and modern metal touch. They also blend in flute and violin in a very well-balanced manner. However, don’t be fooled by this, Bellfast are heavy and more metal than folk when it comes to the sound. The mix also enhances the heavy edge. Great guitar-playing with tons of nice harmony-work, thunderous drums and heavy plodding bass that at times gives it a touch of Steve Harris, but a bit more subtle. The vocals fit in well with the music and the whole package works really great. The songs are very well arranged and you definitely hear this bunch have been at it for a long time. Yes, the band was formed already in 1993, even though this is their debut album. Well worth checking out indeed!
Janne Stark
Label: King Records
Country: Japan
Year: 2010
Posted by Janne Stark at 01:26 No comments: