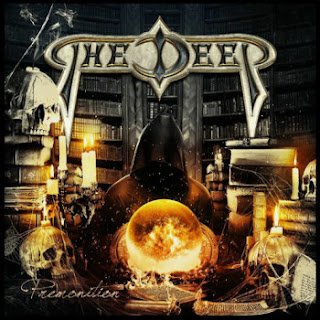 With their roots in bands such as Deep Machine and Airrace, new UK melodic metal rockers The Deep take their first step with the debut Premonition. I was truly blown away by their down to earth, classic melodic hard rock, with the roots in the 80s NWOBHM era. By coincidence, just recently purchased the High Roller release of the old Deep Machine demos. They kicked ass back then and I love that stuff, but I have to say, I actually like The Deep even better. Maybe it’s the maturity of Tony Coldham’s beautiful voice, the years of honing their musical craftsmanship or simply the songs that sits better today. They actually featured a re-recording of the old 1982 demo track Saga. In that case it’s not the latter, but probably the better recording and the band that has become better. Great version! When I learned The Deep was ex-Deep Machine I was actually a bit worried since I saw a recent video of the band with quite horrible vocals, but I guess there are two camps out there (not that uncommon these days). This camp clearly takes the prize in my book. Anywayz… Premonition kicks off with classic NWoBHM style rocker The Rider, a bit reminiscent of early Samson meets Raven. Timeless metal! You Take My Breath Away kicks off as a classic metal number, but goes into a Praying Mantis style melodic rocker with nice harmony vocals. Ok, I’ve mentioned some other bands here, but The Deep definitely have their own sound. I’m totally blown away by Tony Coldham’s fantastic vocals, strong, powerful and clear! Night-Stalker is another track that could have been (was?) written in the early 80s with it’s classic plodding guitar riff. I love it! Cold-Hearted shows a slightly different side, with its almost Lillian Axe style heavy power balladry. A really cool song indeed! I won’t go into each track, but there’s not one single weak track! 10 tracks, you don’t need more. 10 great tracks makes you long for the next album already! Highly recommended!
Janne Stark
Label: private
Country: UK
Year: 2015


Link: http://www.thedeepuk.band/
Posted by Janne Stark at 15:00 No comments: 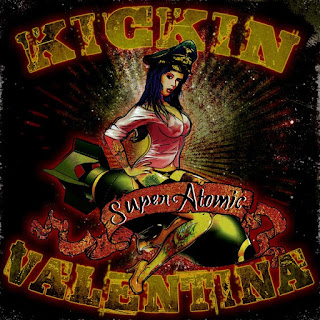 I was never really a huge fan of sleaze and glam, to be honest. I’m more of a heavy riff seventies hard rock guy. However, some bands did catch my attention. Skid Row and Guns did have their moments, as well as bands like Tora Tora and Enuff Z'nuff. To be honest I actually like the current heavy sleaze/glam bands more than I did in the 80s. Maybe it’s me, maybe it’s them. However, bands like Crazy Lixx, Crashdïet and Hardcore Superstar have their fine moments. When I was introduced to American band Kickin’ Valentina I was not really sure it would be my bag, since my good friend, Ken Anthony, who introduced me to them, if way more sleaze/glam than I am. Well, lo and behold, these boys do rock! Super Atomic is definitely a car album. It’s custom made for front seat headbangin’ and it is highly speed inducing. Maybe it’s because they are from Georgia, but there’s a southern feel to it that sets them apart from a lot of the mainstream bands in the same genre. I’m also a fan of singer Joe Edwards’ raspy whiskey voice. There’s no rocket science involved when it comes to the song writing, but this genre doesn’t need it. It’s based on attitude, power, performance, delivery and a great sound. Kickin’ Valentina check all the boxes. I actually like this one!
Janne Stark
Country: USA
Year: 2015
Label: Highway9/Target 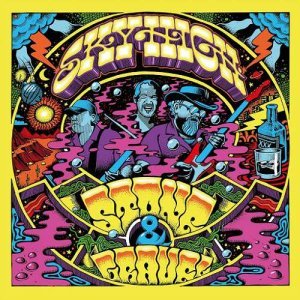 Swedish heavy blues rockers Sky High, lead by guitarist/singer Clas Yngström, refuse to give up. They were around when the burning bush still hadn't caught fire and they are still going! And, damn I’m glad for that! What I’m even more glad for is that they never fail to deliver. What makes me EVEN MORE glad is that Stone & Gravel is their best album in years! I was afraid Clas would embellish the big band stuff and walk down that road. But not, noooooo way! Stone & Gravel should actually be entitled Rock & Concrete! This album is one heavy mother! It starts out with the groovy Pretty Young Women (And Dirty Old Men), followed by the slightly ZZ Top:ish stomper One Step Back. If these two tracks haven’t convinced you already, just move on to the power shuffle A New Old Style (Old Farts Boogie), rolling on like a heavier updated long lost cousin of their old classic I Ain’t Beggin’. This is the top of the boogie class! There are no signs of wear or old age, even if some of the titles suggest that should be the case. F’get about it! This is power trio galore! It’s also nice to see the classic trio featuring Clas, bassist Arne Blomqvist and drummer Marcus Källström together again. It sounds like they were never apart in the first place. Tight, groovy and rockin! I also must give a heads up to producer Jonas Kjellgren who has given this platter the ultimate power and heaviness without making it sound too modern or artificial. It still sounds like real tubes, old Strats and acoustic drums! Welcome back guys! A killer album, indeed! And, the artwork looks absolutely killer!
Janne Stark
Label:Pike Records
Country: Sweden
Year: 2015


Link:www.skyhighblues.com
Posted by Janne Stark at 14:52 No comments: