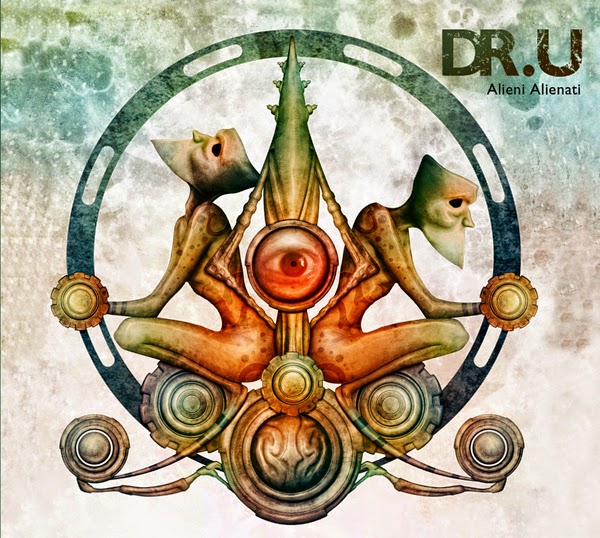 Italian singer Chris Catena is foremost known for his heavy, funky hard rock solo albums, which features a long line of prominent guests. Great stuff indeed. However, this time Chris is involved with a band concept and more surprisingly, he is singing in Italian. Well, to be honest, I’ve always had a soft spot for vocals in Italian, ever since I discovered the outstanding seventies progressive bands from this country, such as I Teoremi, Il Rovescio Della Medaglia, The Trip, I Califfi etc. Well, Dr.U does not belong to this genre, even though Chris reportedly sings in an old reformed Italian band, which is highly interesting. No, Dr.U plays melodic modern metal/hard rock with strong pop melodies. At times they actually remind me of The Rasmus, but with a heavier edge. I must say Chris sounds so very comfortable singing in Italian that his voice comes very much into its true zone here. His best vocals performance so far, I think! Great melodies and arrangements, nice hooks and the high-class production from Joe Marlett (Queens Of The Stone Age, Blink 182 etc) make this a highly enjoyable album. The interesting thing is I rarely can take an entire album of this style, as it often becomes a bit too generic for me. However, Dr.U manage to keep my interest up because the songs are very dynamic and varied in mood and style. There’s some serious heavy rocking going on in Furori per il mondo, but it also has a chorus that etches itself into the brain without being cheesy. Great guitar playing too, with nice shredding solos. There’s more cool heavy riffing in tracks like Dimensione and especially in the brutal P.S (Post Scriptum). This may be slightly outside my daily musical routine, but I can honestly say I really love this album and it’s been stuck in my CD-player for some time now!
Janne Stark
Country: Italy
Year: 2013
Label: Valery Records


Link: http://www.we-are-dru.com/dr-u-alieni-alienati/
Posted by Janne Stark at 13:35 No comments: