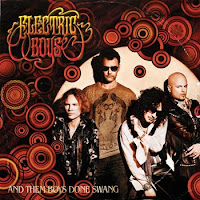 To be honest I’m not really sure what my expectations were for this reunion album from the Swedish funk ‘o metal combo, but they sure as hell were exceede! The boys sure prove they mean business already in rock-out-smash-in-your-face rocker opener Reeferlord. Man, this band ROCKS!! Halfway through the song the add some of the old heavy riff funk vibe to the mix as well. The good old funky vibe continues in second track “My Heart’s Not For Sale”. Man, this is really really good! The great heavy and fat production helps elevate it even further. Of course the Beatlesquey vibe previously heard in songs like “Mary In The Mystery World” makes an entrance here as well. This one has an equally dope induced title “Father Popcorn’s Magic Oysters”. Sure they were oysters? Not mushrooms? The track sure has some hit potential without being wimpy. Another one is “Ten Thousand Times Goodbye”, which is more of a ballad type song with a strong Beatles vibe. It’s however when they rock out my feet get going. One prime example is the Zeppelin meets Aerosmith with a strong funky vibe rocker “The House Is Rockin”. Showcasing drummer Sigevall’s Bonham style drumming. The band is tight and well-oiled, and they do swing! Another outstanding funky rocker with a simple, heavy and crushing riff is “Welcome To The High Times”, a track that you just can’t sit still to! Killer!! “Sometimes U Gotta Go Look For The Car” would be a perfect soundtrack, but here it feels a bit more like a filler. Nice riff, but the car doesn’t really take you anywhere. I just LOVE the cool intro/verse guitar riff in “The Days The Gypsies Came To Town”. The song has a really cool late 60s/early 70s bluesy vibe with some cool bass playing from Crystell. Cool vibe, indeed! “Rollin’ Down The Road” is another prime example of the E Boys delivering strong, fat and effective riffs, adding a great melodic chorus. Sometimes bands put the weakest songs in the end. What about this one? Nope, the boys don’t disappoint. The album ends at really high note with up-tempo rocker “A Mother Of A Love Story”, which has a truly Kiss-inspired half-tempo chorus. One fine rocker indeed! All in all this is a really killer album, proving that the boys don’t get older, some just lose their curls or at least cut them a bit shorter. The power’s not in the hair, that’s for sure! Them boys done swang, yes indeed!
Janne Stark
Label: Supernova
Year: 2011
Country: Sweden
Web: www.electricboys.com
Posted by Janne Stark at 05:56 No comments: 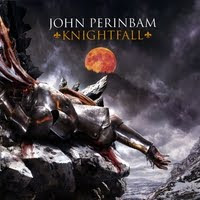 John Perinbam may not be a name you know, but this album should definitely change this. John has previously recorded two albums with Canadian metal band Ivory Knight. The second album was produced by Annihilator guitarist Jeff Waters, and even though the albums were pretty good they didn’t hit me all that much. Now John’s going solo, and he’s doing it with the aforementioned Waters handling guitars and bass on the album. Some additional vocals are added by fellow Annihilator member Dave Padden and ex-Exciter Dan Beehler, while former Ivory Knight colleague Rob Gravelle plays guitar. A great combination of people indeed. It feels like all the pieces have come together perfectly this time. John has a great powerful voice which fits the music like a glove and he switches seamlessly between clean and melodic vocals to a harsh and rough vocal persona. John’s solo debut is filled to the brim with great powerful, yet quite catchy metal. Stylewise I’d place the album in the same category as Megadeth on “Countdown To Extinction” (their best album in my opinion), Annihilator or Riot in their more metal era. The mix is really dry and tight and the guitars are in your face, but without overpowering. I really love that. Some songs like “Away” and “Not Enough Too Much” are actually quite melodic and should even have a mainstream appeal, while stuff like “The Shepherd” or “Inferno 2008” are full on riff metal at its best. This is a highly recommended piece of killer Canadian metal (even though John was born in Scotland).
Janne Stark
Country: Canada
Year: 2009
Label: private
Buy it here: http://www.cdbaby.com/cd/perinbam
Posted by Janne Stark at 01:26 No comments: