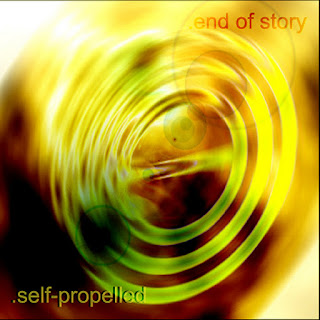 US band .end of story has released one official CD and some very promising demos. One album that was only half-finished was entitled .self-propelled and sounded really great already as an unfinished album. Now guitarist/singer Skot Reed and bass player Dave Eichman have finally finished up the album with the help of drummer Troy Hagar. If you’re into King’s X style hard rock with cool, and quite odd harmonies, detuned riffing, great melodies and heavy grooves, this band is a MUST. There’s not a weak song on this platter, instead it goes between good, great and killer! Among the last category there’s the heavy One Mrs. Hippie, the funky/heavy Reaper Sublime with killer bass work from Eichman, not forgetting the outstanding cool Blue Sun with cool vintage King’s X style variations and harmonies. This is music porn! Besides being a killer guitarist with great feeling and technique, Skot is a formidable singer with a really cool tone to his voice. I sure hope some label picks this one up and gives it a proper release, coz it sure deserves it!
Janne Stark
Country: USA
Year: 2011
Label: none
Link: http://www.endofstory.com/
Posted by Janne Stark at 00:01 1 comment: 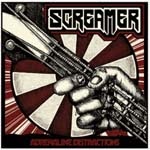 Now here’s yet another combattant in the New Wave of Swedish Heavy Metal. We already know Enforcer, Helvetets Port, Steelwing and Portrait as young bands who have listened to their fathers old tape collections and quite successfully recreated the sounds of the classic 80s heavy metal with all the little charming flaws. Well, add Screamer to the lot. If they had recorded this with a slightly thinner sound, maybe recorded it to cassette and copied it a couple of times to make it lose a bit of quality, man I would’ve been fooled! Quite authentic I’d say. This type of stuff really brings you back to those days of tape trading and plays on the nostalgia nerve. Fans of nu-metal should pay no attention whatsoever to this, but all ye old metal fans out there should definitely add Screamer to your list of CDs to buy. The band sounds pretty tight and good, with a potent singer that deliver the classic eighties lyrics very convincingly. This sounds really good, boys!
Janne Stark
Label: High Roller
Country: Sweden
Year: 2011
Posted by Janne Stark at 23:57 No comments: 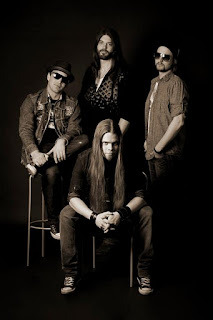 We're off to Skellefteå and Blister Brigade. Man, that’s some pretty cool odd riffing straight in your face already in the opening track Devastating Smile. Then it goes into some weird sleaze vein. The band sounds really good and the style quite is quite original. Nice opening indeed. Second track, Rock ‘N Roll Grave, is sort of a semi-ballad which sounds more like Hanoi Rocks, but didn’t really hit me that hard, even though the chorus is pretty strong. Last track, Worst Case Scenario, picks up the pace again, again with some pretty cool riffing mixed with traditional sleaze-oriented metal. The band has a good tight sound. The singer is not a high pitch screamer, but sticks to the lower registers. He may not be the world’s most exciting singer, but he does do the job pretty well. Not bad at all.
Janne Stark
Country: Sweden
Year: 2012
Label: none
Link: http://sv-se.facebook.com/blisterbrigade
Posted by Janne Stark at 23:55 No comments: 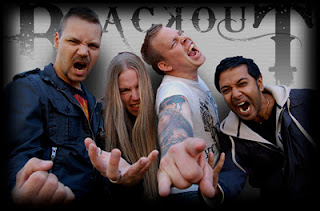 Swedish metal merchants Blackout Metal is musically way more exciting than their name. There must be at least a couple hundred bands called Blackout. Tip no 1: Change the name boys! I saw the band live at the Rock Out Wild festival in northern Sweden last year and they did very well live. Opening track Addict starts it off with some really heavy, crunchy riffing topped with clean but powerful vocals. Second track starts out a bit weird, where it sounds like the bass and guitars are either not tuned the same or someone is playing something differently, or it’s just for effect. Anyway, the track reminds me of vintage thrashy Metallica, think Four Horsemen or Whiplash. Final track, Never Again, continues in the same vein. Tight, powerful and good! This band should definitely appeal to fans of good old thrashy metal in the vein of Anthrax, early Metallica, Megadeth, Testament and Vicious Rumours etc.