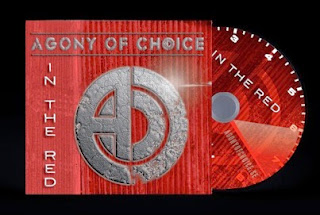 Swedish modern heavy rockers Agony Of Choice make their debut with a 6-track MCD. Modern sounding heavy rock with a touch of bands like Shinedown, Theory Of A Dead Man and Alter Bridge. Unfortunately there’s not much info on the CD, but the band has a really great singer. The sound is well-produced and fat. Slightly odd drum sound that sounds more 80s than 2015, but it kinda works. Opening Mannylee is a strong potent rocker that hits nicely. My only complaint is that the lead guitarist needs to make sure he’s playing in the correct key. Tattooed Skin continues in the same vein with a nice catchy chorus. Really good and dynamic arrangement, too, with a cool acoustic interlude that enhances the sound. Wallstreet Dance is another decent track, not as direct as the previous ones but still a nice one. Friendly Fire keeps the momentum going while Going Bad has a slightly different style to it. Here the drum sound unfortunately works against the song, sounding way too un-dynamic and “loud”, especially in the more laidback parts. Same thing here with the guitar leads. They do need to work with the chords of the song. The final track, Parashoot (not sure if the misspelling was deliberate) is probably my favourite on the CD. A heavy detuned riffster with a cool verse and great vocals and a guitar solo that this time works for the song. A promising debut.
Janne Stark
Label: private
Country: Sweden
Year: 2015