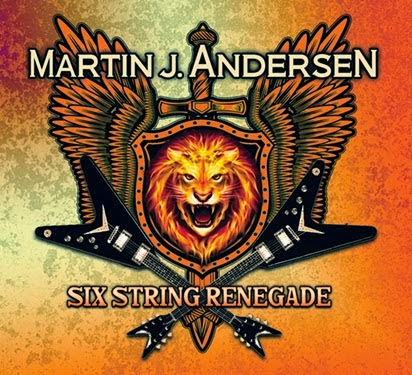 Martin Andersen may not be a household name, but if you’re a fan of the Danish dynamite band Blindstone – you KNOW who HE is! Martin is an outstanding heavy, bluesy guitarist and an awesome bluesy singer, and now he gets the chance to shine on his own. Here he also plays bass and keyboards, while Klaus Agerbo handles the drums. Well, don’t expect a pop, metal or jazz album. When Martin goes solo, you will make no mistake he is the driving force behind Blindstone. He’s always had a cool funky touch that makes me think of Frank Marino. Well, he keeps on nurturing it here as well, but he also stretches out with some nice instrumentals. One, which I must comment on initially, is the highly surprising “The Trooper”, originally by Iron Maiden. Martin really puts his own spin on this one making it a cool instrumental hard rocker! There is also some more classic bluesy stuff here such as “Dirty Little Angel” and Johnny Winter’s “Stranger”. Another, not as far fetched, cover is “Strange Dreams” by Frank Marino & Mahogany Rush. A perfect fit indeed and a killer version! Despite being perfectly in Martin’s wheelhouse, he does put his own spin on it, especially when it comes to the extra spicy guitar tone. “Never Ending Climb” keeps the heavy, funky vibe going and this one is closer to the house of Blindstone, but it also has a different melodic quality added to it. “Freak Flag Flying” really gets the Hendrix mojo  going and “Funky State Of Mind” is what it sounds like. Funk rock with a nod to the old school of Parliament and Funkadelic. The album ends with the ten minute instrumental guitar orgasm featuring guest benders Michael Denner, Torben Enevoldsen and Soren Andersen. This track really builds up like a movie, starting all cool and melodic with a bit of drama coming in after a while. Halfway in the real guitar drama begins with one solo leading into another. A great album, giving Blindstone fans yet another bite to chew and the opportunity to discover the Danish guitar gems. Highly recommended!
Janne Stark
Country: Denmark
Year: 2015