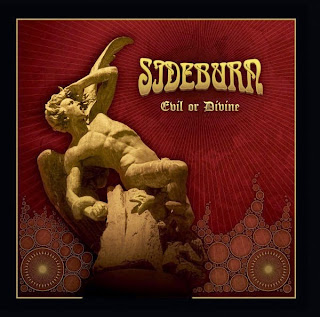 Stockholm based stoner rockers Sideburn (not to be confused with the Swizz namesakes) have been going for quite some time now. They made their debut in 2001, with the album Trying To Burn The Sun. The band has been a very consistent, high quality power pack, and on their new and fifth outing that hasn’t changed. What however has changed, is that singer Jani Kataja has been replaced by Dimitri Keiski. A bit surprising as he won the Swedish “True Talent” in 2011 and hasn’t really been seen in the doomier rock circuits. Well, ok, he was also a member of Insania (Stockholm), but that’s not really heavy is it? The interesting thing is that on the previous albums the music was more detuned, slower and heavier with Jani’s voice being quite high pitch and soft. I really loved that combination. The new album marks a change to a more classic sounding seventies heavy and doomy sound with Dimitri adding his cool slightly thicker voice. Another great combination, which marks a great development for the band. Opening track Masters And Slaves really brings out the Born Again era Black Sabbath vibe, while Sea Of Sins is a more up-tempo retro rocker with some really cool riffing and Dimitri singing his heart out. When Darkness Calls is a slow, dark number, also bringing on some early Black Sabbath vibes, but with Dimitri adding a different touch to it. Very cool and dynamic indeed. The Seer (Angel of Death) reminds me of colleagues Grand Magus in their prime. A great groovy track with a doom-boogie vibe to it. The Day The Sun Died opens up, also drawing vibes of early Sabbath, a bit more reminiscent of the band’s earlier stuff, but still with a new touch. Evil Ways is a nice up-tempo number with some really cool Iommy-style riffing in the verse. The album finishes with the epic Presence, which goes from soft to heavy to floating to doomy. A great development for the band, a killer album and one you should definitely check out!
Janne Stark
Label: Metalville
Country: Sweden
Year: 2015