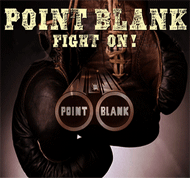 Anybody remembers vintage southern rockers Point Blank? Yepp, thought so. After way too many years of absence they finally re-united and entered the stage of Sweden Rock Festival last year. When watching the band deliver classic rockers like “Uncle Ned”, “Bad Bees”, “Back In The Alley” and “Nasty Notions” my smile just wouldn’t stop growing. A tour followed and now the band has finally released a new studio album. My favourite period of the band was the first four albums; “Point Blank”, “Second Season”, “Airplay” and “The Hard Way” after which they became a bit too slick and mainstream for my liking. I’m happy to say the return of the southern gentlemen is closer to the early years than the later. Ok, it may not be as dirty and rough as the vintage stuff, but that also has to do with the recording qualities of today etc. The edge is still there in tracks like “Down Not Dead”, “Fight On!”, “Hit The Bottom”, “Deep Ellum Women”, “Out Of Darkness”, “Big White Horse”, “Undercover Lover” and “Short Stack Of Blues” (which makes it most of the tracks, right?), while they show the softer side in tracks like “Made Of Stone”, the sweet instrumental “My Soul Cries Out” with its great guitar harmonies and acoustic soloing and my least favourite on the album, the sugar sweet “Cold Day In Hell”. Even there are no riffs that give classics like “Uncle Ned” or “Nasty Notions” a run for their money, the song material is consistent and it’s really good. It’s an easy listening album, very melodic but still with a nice rough edge to it. It should appeal to both long lost fans and a new crowd of southern rock fans. It’s great to hear O’Daniel still sings southern rock the way it’s supposed to be sung. He still has enough cohones and bluesy feel to pull it off with pride. The same can be said about Rusty Burns guitar playing. He plays with the same conviction, feel and power as ever! Old guitarists don’t fade away they just get longer beards! A nice return from a band I had almost given up on!
/Janne Stark
Genre: Southern rock
Label: Dixie Frog
Country: USA
Year: 2009
Website: http://www.pointblanksouthernrock.com/
Posted by Janne Stark at 04:22